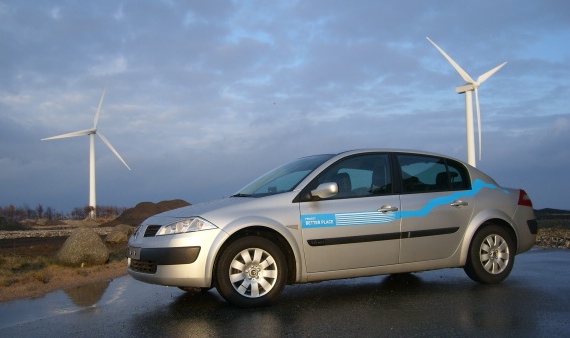 In July, I used an op-ed piece by Tom Friedman from the New York Times to discuss the importance of renewable energy, and how we as marketers can incorporate it into our printed communications.  One of Friedman’s examples was Shai Agassi, the founder of Better Place, a company focused on creating electric car grids around the world.  What’s exciting about their business model is that it approaches the car business much in the same way that cell phone networks like AT&T and Verizon Wireless approach their own – they plan to sell miles like these networks sell minutes.

Friedman wrote a follow-up piece about Agassi and his company last week, and I wanted to make sure readers of Sustainable Ink didn’t miss it.

I had the opportunity to hear Agassi speak in person earlier this month at the Museum of Science in Boston.  He was an inspiring presenter and certainly a person with a great vision.  Although I cannot guarantee whether his plan will work, I was impressed by his resolve, especially in the face of rapidly declining energy prices.  Although people may be less apt to adopt his electric car model when gas prices are under $2/gallon in the United States, he laid out a plan for success, and delivered his message in a clear and exciting way.

His determination should serve as an excellent example to other executives who have either made public commitments to sustainability or had been considering green initiatives when the economy was stronger and now are mulling whether they should move them to the back burner until the economy turns the corner.  My strong advice to these leaders would be to not let the tumultuous economic times distract them from positioning their organizations for success in the future.  Shorter-term approaches necessary for ensuring a stable enterprise may involve cost cutting now, but longer-term strategy should not be overlooked.  Generally, for organizations to be successful in the long-term, they must be able to successfully create new products, compete in new markets, and recruit the best talent possible.

My belief, is that in this environment of limited natural resources, undoubtedly unstable energy prices, and a public that cares deeply about fighting global warming (not to mention an administration that has made the reduction of carbon emissions a stated goal), organizations that incorporate environmentally-responsible practices into their businesses will not simply be making moves to address a short-term fad, but instead will be building sustainable enterprises.  They will be ensuring the long-term survival of their organizations in a future where their customers want to buy products that use less natural resources and leave less of a footprint on this earth.  In fact, IDC, a leading research firm, reported last week that a recent study found “continued support for sustainability initiatives despite current economic challenges.”

Although many companies will hold off on making any green investments while they face a deep credit crisis and sagging revenues, if they want to remain successful enterprises and position themselves for long-term success, sustainability must be a part of these plans.